Solving the Secrets of Sophie: A Diagnostic Odyssey Through Genetics 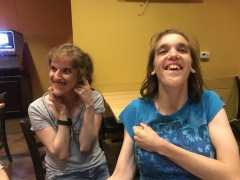 Sophie, now 26, was just 12 hours old when a pediatrician came to my bedside and said something that sounded like “blah blah blah cardiologist” and “blah blah blah geneticist.” Nothing prepared me for the shock and pain of those words: not six months of bed rest or four hospital admissions during my pregnancy, not hearing “you have too much amniotic fluid” at 28 weeks, not the intermittent, eerie premonitions throughout my pregnancy that something just wasn’t right, not even in the hours immediately after delivery with the peculiar, standoffish behavior of the labor and delivery floor nurses.

The immediate thought was of my three-year-old son and the realization of how having a sister with a disability would impact his life. His exuberant delight when he met Sophie for the first time is my one and only joyful memory of her arrival.

The next morning, a cardiologist came to my bedside to explain Sophie’s heart condition. She had a stiff pulmonary valve and a couple of small holes that were likely to close on their own. The prognosis was good. The cardiologist gave me hope, so much so that I asked him about grandchildren. He reassured me that based on Sophie’s cardiac status, she could possibly have children and make me a grandmother someday.

The relief brought by the cardiologist faded quickly the next day. A geneticist (a.k.a. Geneticist #1) came to see me with sobering news and, almost as bad, an icy bedside manner. I could not comprehend what he was telling me. He recited a long list of Sophie’s physical characteristics that measured outside of the “normal” range. Her ears curled and were too low. Her nasal bridge was too wide. Her eyes were too far apart. The space below her nose and above her lip was too small. She did not have fingerprints and was “birdlike.” (Yes, he really said that.)

Geneticist #1 seemed certain Sophie had one of two syndromes. Both included moderate to severe intellectual disability (although he used old terminology, the “r” word that has since been banned by legislation). My heart ached.

Genetic tests were ordered. We waited for weeks for the results. It was a relief to get them and prove Geneticist #1 wrong. Sophie’s tests were “normal.”  By then, at the recommendation of a physician friend, Sophie had seen Geneticist #2. Although there was still much concern, Geneticist #2 did not order more genetic tests but instead followed her for many months.

Without having answers or even clues, Sophie was then referred to Geneticist # 3. We began attending his clinics every few months. Geneticist #3 would examine Sophie, note her progress (and it was worth going just to hear encouraging news), share his current hypothesis and order labs for more genetic tests. By then, although Sophie’s development was significantly delayed and she was receiving multiple therapies, she was an extremely happy baby.

While we continued our regular visits at the genetics clinic, one of Sophie’s neurologists told us that a renowned geneticist, Dr. Jean Aicardi, would be visiting Florida, where we lived at the time, from France. If anyone could diagnose Sophie, it would be Dr. Aicardi (a.k.a. Geneticist #4). After a brief examination, Dr. Aicardi could not provide a diagnosis. He did share welcome news: He was certain that Sophie did not have a degenerative condition.

The early years immersed in this diagnostic odyssey were frustrating and exhausting. There were countless consultations, diagnostic scans such as MRIs and CTs, clinic visits, genetic tests, eager anticipation for the results and disappointment. Sophie’s blood was even sent to Belgium for special testing.

One day, in talking with a parent at Sophie’s preschool and comparing our experiences at the genetics clinic, we discovered that our children — who looked and seemed nothing alike — were being tested for the same syndromes. In that instant, I knew that the science of genetics was too primitive for my liking. It was all a big guessing game. Geneticists were searching for needles in haystacks while Sophie was growing more miserable and possibly becoming traumatized from being restrained for repeated blood draws.

I had already been wondering, who cares? Sophie was just Sophie. It bothered me to look at my beloved child through a lens of “what’s wrong with her?” There was so much that was right. I just wanted to enjoy Sophie, who by then was remarkably joyful (when not at a doctor’s office) and progressing daily. At age four, I stopped the genetic testing. Genetic science would advance significantly before I came to appreciate its importance and value.

Fast forward 10 years. Sophie was now 14. We had left Florida, built a new team of providers (with the exception of a geneticist, which was intentional) and had been living in Austin for several years. My curiosity began to grow. At an appointment with Sophie’s neurologist, whom we loved and respected, I asked if genetics had progressed in 10 years and whether returning would be worthwhile. He thought science had advanced considerably and made the referral.

Geneticist #5 had several hunches and ordered tests. The blood draw was timed to coordinate with Sophie’s dental cleaning under sedation to ensure her comfort. Two months later, we got the call with the results. “Ms. Goldstein, we have good news.” Anticipating a revelation, my heart pounded. “The results are normal.”  Wait, what? “We don’t know more than we did when we started and that’s good news?” I asked.

The disappointment passed and we returned to our busy lives. I was not interested in further testing. Genetic science did not impress me. If only I knew how one day it would astonish me.

When Sophie was four and we closed the door to genetic testing for the first time, my imagination opened up. I started envisioning that one day a random stranger (picture Albert Einstein) would come running down the street after us. He would study Sophie intently and then tell us everything about her. This fantasy persisted over the years. Part of me believed it would come true.

When Sophie was 17, a friend who never calls me at work called me at work out of the blue. She had just seen her hairdresser who was curious about the young lady (Sophie) she had seen recently with my friend at a restaurant.  Although the hairdresser hadn’t stopped at our table, she noticed Sophie and thought she resembled her niece, who has a rare genetic syndrome. Oh my! Curiosity started tugging at me again. I talked with our state geneticist, also a friend (a/k/a Geneticist #6). She was certain Sophie didn’t have that particular syndrome but encouraged us to return to Geneticist # 5 for further testing. So we did.

Geneticist #5 ordered a microarray along with some other tests. We waited for the results and got more “good” news. The results were normal. We learned about a more advanced test called the whole-exome sequencing. Although insurance would cover 100% of the cost, I didn’t have enough faith in genetic science to justify the expense, even if it wasn’t my dime. I also never researched “whole exome sequencing” to learn more about it.

Several years later, as Sophie approached her 21st birthday, the strings of curiosity tugged again and my thoughts included my son, now an adult. What if he wants children one day? Is there something that can be identified about Sophie that would make a difference to him? On a practical side, I was also concerned that insurance coverage for genetic testing could be more difficult to access over age 21. I sought advice from my geneticist friend (a.k.a. Geneticist #6) and Sophie’s neurologist. Both encouraged us to go forward with the test.

The whole-exome sequencing involved a much different process than previous tests. A pre-test session with a genetic counselor was required. My blood was tested too. The analysis would take six months and results would be presented only in person by Geneticist #5, not over the phone.

Finally Getting an Answer

The day to get the results arrived. A few friends came to the appointment with us. Anticipating more “good news,” I was in a hurry to get it over with and get to work. Geneticist #5 entered the room carrying a pile of papers. She began talking. When I realized I hadn’t comprehended a single word, I stopped her. “You’re trying to tell us something. Before we go on, I just need to know, is this a big thing or a little thing?” I was now a full-fledged cynic of genetic science and needed the context. “It’s a big thing.” she told us. “Your daughter has a confirming diagnosis of Mowat-Wilson Syndrome.”

We sat speechless and breathless. After 21 years, four months and four days, Sophie had a confirming diagnosis. She had an instruction manual, after all! In a single, stunning moment, everything changed, and nothing changed. My vibrant, sweet and fun-loving Sophie was still Sophie. We now had a better understanding of her seizures, expressive language delay, congenital heart disease and more to help better address her health needs and ensure her future well-being.

Time stood still while the astonishing findings were explained.

Mowat-Wilson Syndrome (MWS) is a rare genetic condition. Only a few hundred people in the world have it. It is characterized by a mutation of the ZEB2 gene. There are resources for families, including a foundation and Facebook groups. Sophie and I were warmly welcomed to the worldwide community of families sharing a most profound connection.

In time, I wanted more. Every Facebook post of a young adult with MWS somewhere in the world left me longing for Sophie to know even just one of her genetic sisters or brothers.

One night, several years after Sophie received her diagnosis, I saw a photo posted by a friend on Facebook, who was showcasing artwork made locally by adults with disabilities. There, alongside the beautiful crafts, was a young lady with unmistakably familiar facial features. I saw the long chin and furry eyebrows that are distinct characteristics of MWS.

At my insistence, my friend who posted the photo reached out to the family. The young lady, Alli, is a triplet (yes, a triplet!) and had not had genetic testing in years. Now 22, you can imagine her parents’ surprise to be contacted out of the blue about the possibility of Alli having a rare genetic syndrome. We met in person several weeks later. By then, Alli’s mom had done her research online. Seeing our girls together — two peas in a pod — left no doubt. Later genetic testing confirmed what we already knew: Sophie and Alli are MWS sisters. Our families live only 30 minutes apart. Getting our genetic twins together allows for sharing experiences and adds fun to our lives. Today, through the wonders of modern genetic science, a diagnosis of Mowat-Wilson Syndrome can be determined in infants and even in utero. Had Sophie been born now, we likely would not have met with so many geneticists — most of whom truly did their best with far fewer tools available to them.

Families learning of any serious genetic condition when their children are young, benefit from immediate connections with other families and sharing valuable health information. At the same time, unlike our experience, when the mystery of Sophie was finally solved, families may feel heartache and grief. I had these feelings, too, beginning when Sophie was just hours old.

In time, many families of children with disabilities discover, as I have, that while there are significant challenges, our children are powerful magnets for love and blessings.