Personal Stories About People with Disabilities 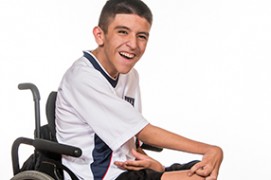 We’ve put a lot of information about transition on this website. We hope it helps you plan, manage, and deal with all the work and emotions that come with this time.

But somehow, nothing brings the transition to adulthood to life like a personal story. Some parents we know have shared their own experiences in the hopes of helping you with yours.

Sam’s Story – Living in a Community

Sam is an adult with autism. Sometimes, when I think about why Sam wants to stay in our small hometown, I know it’s about the reliable relationships he has in the community that allow him to have more of his own independence. Like, I know everyone at Dave’s Auto Shop, where he gets his car fixed, so I don’t feel like I have to backtrack to make sure nobody’s taking advantage of Sam as he takes care of his car. The restaurateurs in town know him and his food preferences, so he can go in and eat without me. He schedules his own checkups at the dentist and the doctor. The people at the credit union know him, too. Even for adults, it takes a village. And this village supports him so that we both have more independence.

Brandon’s Story – Getting Through Medical Transition

I knew there were going to be some hiccups when Brandon went through medical transition. I just didn't realize they would all hit at once. When Brandon turned 21, Medicaid stopped covering his Pediasure, and we needed a doctor’s order to cover Ensure instead. It was just before Christmas, all his doctors were out until January, and Brandon was running out of food. We ended up having to buy a case until we could get into the new doctor.

Brandon’s job training team has been one of the best parts of his transition. He stayed in school for an extra 4 years to work on employment skills. His school program has helped him find jobs, and he’s worked in more than 12 environments, including choosing records for the KOOP Beatles show. At first, he really didn’t know how to work. But when he’s run into job frustrations, his teachers and the people in his network talk through them with him, and helped him figure out his strengths and challenges. We worked with his current employer – The University of Texas – and they found him the perfect job to match his skills and build his social contacts: sorting and delivering mail. He’s worked there for a year-and-a-half now.

Colton had learning disabilities and was diagnosed with ADHD as a child, but he didn’t get a diagnosis of autism until he was 20. Getting the diagnosis so late has made it harder to find a school, job training, and social skills programs for him. It’s been really frustrating for us. Our DARS program was more than 40 miles away. We worked with DARS to start getting training at our local high school instead. It was helpful at first, but at some point, the counselors didn’t seem to know a lot about adult programs. But using the forums and talking to the parents at Texas Parent to Parent has been amazingly helpful. Now we’re figuring out how to apply for Social Security, so he has income while we’re helping him figure out his job training.

While Payton was in school, her school kept questioning me [her mom] about getting guardianship for her. As I explored guardianship further, I found out I would have to declare Payton “incapacitated.” I stopped the process to really think about whether or not this was the best choice for Payton. In some ways, Payton was a typical teenager, but in many others, her development was much younger. But she is very teachable. So, for now, I help her manage her finances and I’m still working with her to make appropriate school and health care decisions.

Probably the hardest thing for Jake after high school was his social life. Learning to make a meal or figure out a college class was a lot easier than that. In school, he had a community of friends who he knew for a long time and saw every day. But that ended with high school. And if it’s hard to express your thoughts and ideas, it can be hard to connect with people as an adult. Even if a parent manufactures social contact, it’s still manufactured. It was easy for Jake to get really isolated. And when you have autism, any routine is hard to change, even a routine of isolation. But this year, he joined a social group for adults. And he’s followed his interests to join his church choir and a bowling league too.

Gilbert’s Story – Graduating and Getting Ready for College

Gilbert is 20 years old. He had bone cancer as a child. The radiation and chemotherapy have left him with some physical disabilities, and it can take him longer to learn things. He was in special education all through elementary school. But he’s very bright. He graduated from high school last summer. He wants to go to college, and 2 universities near him have worked with him to talk about the accommodations he'd need. But he has to meet their tough entrance requirements. So, he’s taking a year off to get ready for college. In the meantime, he’s been doing a lot of equine [horse] therapy, and recently placed in the top 10 riders at a national competition in Oklahoma.

Brandee was diagnosed with ADHD as a child, and I always thought that her problems with school were because of that. But when she was 18, we found out that she has bipolar disorder. Honestly, that’s been pretty hard for her. Trying to keep a job has been really tricky. She went onto SSI [Supplemental Security Income], and I found out that she could get job training services from DARS. Now, she’s 26. She’s going to Austin Community College and she’s studying in their culinary arts program. She still needs emotional support, help staying on task with things she’s doing, and help managing her money. As her mom, I still give her those things. But she lives in an apartment with roommates and she manages her own health care.

When Will was 20, he moved from our home to the home of his high school special education teacher. We knew she knew his needs, and now that she wasn’t his teacher, it was a good step towards independent living. She was paid out of CLASS funds and through Will’s SSI and food stamps card. That step really enabled Will to grow into an adult with new expectations, new experiences, new relationships, and new social opportunities. He matured into a person who prefers adult activities and peer company. A person with unique needs and desires, someone ready to be as independent as possible. And it helped me get out of his way and let him be more of an adult.