I recently visited my friend Pam to watch her children during their school day.

Walking in, I noticed a bright and sunny classroom. A white board, science posters, math vocabulary, and an American flag decorated the walls. In fact, it looked like a typical middle-school classroom, but smaller and with just two students, Connor and Brynna. The students were engaged and productive. They were enjoying the math lesson. After math, they were heading out to a field trip to the Firehouse Museum.

Welcome to the “Family School of Excellence.” 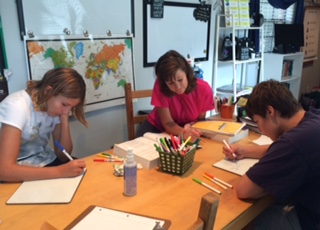 Pam's decision to homeschool came after years of looking for a school where Connor could find success.

Connor didn’t fit into the expectations of staying quiet and not fidgeting. He tried hard, but just could not stop. He was diagnosed with Tourette Syndrome. Symptoms include involuntary motor tics (movements) and vocal tics (making sounds). These symptoms make it hard for Connor to sit still and be quiet.

Pam became an advocate for Connor and for other students with Tourette Syndrome. She shared her knowledge with his teachers in order to facilitate his educational needs. Educators were less than responsive to Pam—who is a licensed speech pathologist—and her suggestions for Connor’s education. She realized that Connor was being punished for his tics, which brought on anxiety and a sense of failure. After many attempts to work with his educators and trying several different schools, the family chose to homeschool Connor.

Connor’s 2nd-grade year, he finished far behind his grade level. So the first job in homeschool was to get him caught up. He did that in the first 6 weeks. Connor was so much happier in his home school that Brynna, who had been attending private school, decided she wanted to learn at home as well. The move to homeschool has been successful for both children.

The school has been open for 6 years. Connor, 13, is an 8th-grader and Bryanna is in the 7th grade. They study language arts, math, social studies, and science in their one-room school. They attend weekly field trips with a homeschool group. They attend concerts and plays, go to museums and parks, and spend social time with their friends.

They have more time to socialize than many students attending more traditional schools. Brynna’s extra-curricular time is spent at the stables, where she rides and works with the horses. Connor is part of an all-boys’ science club.

When asked how he felt about homeschooling, Connor replied, “I love it! There’s not that many kids, so I don’t get hyper or nervous.” Brynna said she loves homeschooling as well. When asked what she would change about homeschool, she answered, “I want to have a locker.” She wants to put a chandelier in her locker and totally decorate the inside.

Homeschooling has allowed Connor the opportunity to learn in a safe, calm environment where he is successful. Brynna has more time to spend with her passion, horses. It has given the family the flexibility to spend more quality time together and to turn family time into part of their education.

Connor and Brynna are learning the skills necessary for them to succeed in the future. They are well on their way to exceptional life outcomes.

Learn more about educational settings for your child on this website. 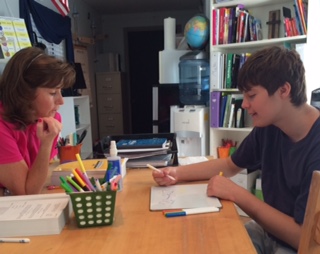 When our kids start school, they might need to be assessed for special education services. Sometimes this isn't needed until they've been in school a few years. The school district must identify and evaluate all children with disabilities. Once identified, they must be provided a Free Appropriate Public Education or FAPE.

Clapping for an Encore

My child’s school district recently did an overhaul of their 18-plus program for Special Education and named the program Encore, which couldn’t be more fitting.

Refusal to go to School

As the mom of a 10-year-old child with an alphabet soup of diagnoses, I am no stranger to dealing with anxiety.