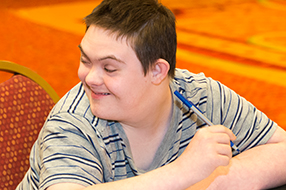 Bullying has been going on for centuries, but over the last few years it has gotten a lot of attention. And rightfully so. People get seriously hurt from being bullied, and people with special needs are big targets! This isn’t cancer, or some disease that doesn’t have a cure. Stopping bullying is teachable, but there is still no federal standard curriculum to use in our schools to help educate children. We are moving forward, but I don’t think we will hit the target until we make this just as important as reading, writing, and arithmetic.

As a nation, we have to start somewhere and, with the new guidance sent to educators across the country, federal education officials say that schools may be liable if they don’t properly address bullying of students – especially children with disabilities. A study from 2012 stated that 63% of kids with autism have been bullied. Another study published the same year found that about half of teenagers with autism, intellectual disabilities, speech impairments, and learning disabilities were bullied at school.

I remember when my child with special needs got bullied. My mind can recall it like it was yesterday, but it’s been 16 years. I remember it because I was horrified and devastated that my child had been attacked and I was unable to protect him. Who were these children and how could children be so vicious?

The look on his face that day has been embedded in my memory since the very minute he came through the door that day. His face was hidden behind his arm in shame as though he had done something wrong. When he lifted his arm, his face was red, his mouth bleeding, his thin, frail body hot and sweaty, and his eyes were very sad.

I could tell he had been in a struggle and immediately began to hold him and reassure him that everything was going to be ok. I then began to question him. What happened? Who did this? Then, there was a knock on the door. My next-door neighbors had seen the whole thing and said that around 6 kids (some walking and some riding bikes) had surrounded my son. They were attacking him blow after blow, hitting him as he tried to shield himself. They continued to beat him, taking turns striking him as he walked towards home.

The embarrassment he felt after his fellow classmates followed him home and began to kick him, hit him, and call him names – causing him physical and emotional harm – will never fade from my memory. And I’m sure my son remembers the day well also.

We called the police and pressed charges against the children. Two of them had charges pending due to other mischief and were sentenced to juvenile detention. The rest of the offenders received probation with community service. Back then, there were minimal laws and guidance on bullying. The outcome was of little relief to my son and me. Most of the children were still at the school terrorizing other students, and still didn’t have the skills to interact positively with others. I can at least say they left my son alone though.

The new guidance makes it clear that there are protections in place for students whether they are regular education students or served in school under the Individuals with Disabilities Education Act (IDEA) or Section 504 of the Rehabilitation Act. (See the Your Child's Right to a Public Education page for more information about IDEA).

What’s more, schools must act to ensure that bullying — whether or not it is based on a student’s disability — does not interfere with a child’s ability to receive special education or other disability-related services.

This is not the first time that federal education officials have spelled out the special responsibilities that schools have to address bullying of kids with disabilities. Just last year, the Department of Education told schools that bullying can lead to a denial of a student’s right under IDEA to a free and appropriate public education (FAPE) if it “results in the student not receiving meaningful educational benefit.”

In order to help us as parents, we need to understand our rights and be able to teach the vital skills children need to have empathy and respect for others. Please visit the Bullying page on this website to gain more information about bullying

What can be accomplished with the right support and vision is amazing. My son wanted to be in the band. This is his story – and ours.

Planning for the Future

Creating a vision for your child’s future will help you plan for the next Admission, Review and Dismissal and Individualized Educational Program meeting.

Finding His Way: My Son’s Second Chance at Success

After high school, your child can still learn skills that will help them find a career. Here’s how.