Finding Support for Families of Children with Disabilities 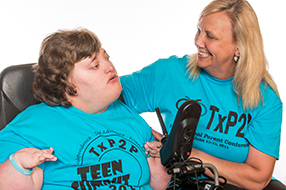 "Whatever you are going through, there is someone out there feeling exactly like you are right now. You are not alone. There is hope.”

Connecting with other families who also have children with disabilities or special health care needs can be the best thing you can do for your child, your family, and yourself. You can gain information unavailable anywhere else, support for when things are good or bad, and a connection to a community that is not available to us in most settings.

When my daughter, Jessica, was 5 weeks old – newly admitted to the Pediatric ICU with RSV and pneumonia, which caused her to stop breathing – I met a lady in the hallway whose son’s surgery for hydrocephalus had gone badly. We chatted, she comforted me, I comforted her, and we exchanged information. Her son died just 2 years ago, my Jess is now 23 . . . We are still friends on Facebook. And although the diagnosis was not the same, in that moment of loss, we were not alone. We had each other, even for that brief time, and it led to a lifetime of connection and hope!

My son, Jason, spent 6 months in the hospital after birth, and while I had many days of panic, there were a few times where I was desperate to talk with another parent who had experienced a micro-preemie and knew what I was going through. I wanted to know that we could survive this! That didn’t happen until Jason was 2 ½ years old – a new preemie group had formed and announced a meeting in the paper with a phone number. I immediately called and talked to the woman for 2 ½ hours! (Note: this was when phones were still tied to the wall by a cord.) It was such a relief to know that there was someone out there who understood. That was also the beginning of my involvement with family support.

Over the past 25 years, we have seen parents who connect for a moment over a resource or tidbit of knowledge or who become life-long friends, through good times and bad – comforting, laughing, crying together over their children’s successes and hard times. It’s amazing to watch, but parents of kids with disabilities never start with small talk! They jump right into the deep discussions – the hard news about a new diagnosis, what just happened at school, what this doctor said or that therapist suggested, how the neighbors stood up for my child, or how to find programs and understand government assistance.

And, believe it or not, we laugh more than we cry! We rejoice with each other over simple things like a first step, a word, no seizures, progress of any kind! We are safe to share those setbacks, defeats, and pain because most of us will cry right along with you.

Tips for Connecting with Other Parents

So, if you are feeling alone, please reach out – we are everywhere and just around the corner – and a listserv is a great place to start or a parent group, a Facebook group, or even an event like a conference. Allow yourself the time to make one connection with another parent. It’s worth the effort!