The Importance of Paid Jobs for People with Disabilities 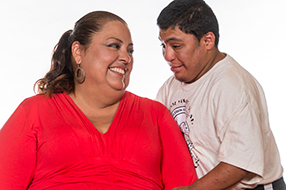 Cristina’s high school job coach was enthusiastic. He had just secured for Cristina her first “paid job.” In their class, all the students knew that a “paid job” was the Holy Grail.

My husband and I were strong supporters of Cristina, who has Down syndrome, obtaining paid employment, but I turned my nose up at this particular opportunity. The job was supposed to start over the Christmas break – meaning we would have to rearrange our holiday schedule – and it was only for 3 hours on Friday mornings and another 3 hours on Saturday mornings, for a total of 6 hours per week.

Our Saturdays at the time were hectic, and the hassle of getting her to and from work (while missing her sisters’ volleyball and soccer games, no less) prompted us to ask Luby’s if there was not, in fact, a different day that she could work. There was not. If Saturdays weren’t to our liking, then she could work Fridays only.

Probably in deference to the job coach’s enthusiasm and his certainty that this was a good thing, we consented to both days. And although it took many months for me to realize it, he was right, and I was wrong.

Paid jobs for people with disabilities can make a world of difference, and that piddly little job at which I had scoffed meant a great deal to Cristina. Although I was frustrated that she was “stuck” in food service, she loved having a job at which she felt competent; she loved earning a paycheck; and she loved having a genuine responsibility to be at work on time and in uniform.

During the school year, the school provided transportation to her job on Fridays. On Saturdays and during the summer and school holidays, however, we provided the transportation. Happily, Luby’s was flexible about allowing Cristina to ask off for Special Olympics competitions and family obligations. Even with some days off, that little 6-hour-per-week job generated about $1,800 of income for Cristina each year.

That job also led to another job – at Taco Bell. That job was only 1 day per week, but it was 5 hours each time. At Luby’s, Cristina did the laundry, washing their napkins and aprons. At Taco Bell, Cristina hand-washed the big pots and pans. She thrived in both environments, and her self-confidence soared.

Cristina long had a desire to move out of our house, and we had told her that she would need to work a lot of hours to cover the costs of living on her own. Part of her satisfaction with working was knowing that it was helping her achieve a long-term goal, and part of it came from knowing that she was doing a very adult activity – going to work and earning a paycheck.

When the day drew closer for her to move out, with the help of the Texas Department of Assistive and Rehabilitative Services (DARS) we began searching for a job closer to where her apartment would be. Cristina got a full-time job working in an assisted living facility.

That job would not have been possible without her previous work experience – and her established work history of being a reliable employee for nearly 3 years at Luby’s. The new job gave Cristina the familiarity of a work environment where she is entirely comfortable – food service – while satisfying my preference for a more white-collar environment with more fixed hours than is sometimes available in the restaurant industry.

Cristina loves sports, and often over the years, when she has been asked what job she wants, she will say that she wants to be a basketball coach in the NBA. It would have been easy for us to hold out for a job that is more in line with Cristina’s dreams, but then we would still be holding.

Instead, by accepting what is comfortable for her, she has found the satisfaction of a job well done, and she has generated enough income that it is feasible for her to share an apartment with a roommate. In short, she has opened the door to a life of her own making.

As for her dream, Cristina has been involved in the cheerleading program at her high school, returning as a volunteer after graduation. Her position as volunteer assistant cheer coach fulfills her desire to coach, and through that job, her leadership skills have blossomed.

By having a paid job that fills her days with meaning, Cristina has the opportunity for hobbies and exploring other interests in her down time. At the University of Texas, there is an innovative program through their Informal Education courses, which offers classes for adults with intellectual disabilities. Cristina loves those classes, and she enjoys attending a book club, participating in Special Olympics basketball and soccer, knitting hats and scarves, and of course, being an assistant cheer coach.

The Future is Coming!

My daughter is 27 years old. She has Down Syndrome and intellectual and developmental disabilities. I obtained guardianship for her just last year. Here’s how and why our family decided to shift from the least restrictive legal guardian option to the most restrictive option.

Navigating the Unknown with the Help of Adults with Disabilities

Listening and learning from adults with disabilities helped me learn so much about my son and his future.