Making Decisions About Independent Living for Young Adults with Disabilities 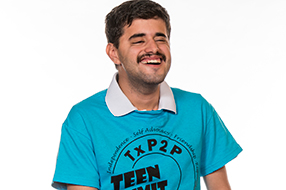 “I can’t wait to be out of this place!” Cristina declared, in one of her less-than-diplomatic moments. Indeed, for as long as I can remember, Cristina has had the desire to do things on her own. When she was very young, it was going across the monkey bars, then riding a bike, then walking to and from school on her own, then trying out for cheerleading in high school. So, it really was no surprise when she declared her intention to move out of our house.

Independent living for young adults with disabilities has unique challenges. Because Cristina has Down syndrome, her journey to independence has necessarily taken a different route than that of her sisters. Hector and I have known that although our eldest daughter has many capabilities – her ability to handle most tasks of daily living, like preparing basic meals, cleaning, waking up, and going to bed independently – we also know that she has weaknesses that will require ongoing support for certain activities.

One weakness is Cristina’s inability to drive. Until driverless cars are available, Cristina will be dependent on someone else to drive her where she wants to go – unless she can live within walking distance to those destinations.

In Kansas, about a decade ago, a group of parents was confronted with that same situation: trying to find the best way to allow their children as much independence as possible while still providing the supports they would need. They realized if their children could live in close proximity to each other and within walking distance to shopping, restaurants, and social and fitness programs, that independence would be possible. They also realized that if the parents provided transportation to work and helped them plan various activities (Zumba class, workshops on various topics, recreational activities, etc.) as well as securing a helper to give them a hand in their apartment several times a week, they would have the support they need. The Mission Project was born.

I recall reading a blog post about that community many years earlier and being intrigued by the novelty of the concept. However, I had never learned more.

That changed in May 2013 as my husband and I dropped Cristina off at a dance for teens and young adults with disabilities. We got to chatting with 2 other mothers with whom I occasionally crossed paths and decided to go have dinner together while waiting to pick up our kiddos.

Over dinner, conversation naturally turned to our children, and it was fun to get caught up with what each of them had been up to. Hector and I explained that we were thinking of buying a house in our neighborhood, where Cristina and 2 or 3 friends could live together.

One of the other moms asked if we had heard about “The Mission Project” in Kansas. She explained that their community allows parents to remain involved in their children’s lives, but the adult children live independently in an apartment complex. She gave us their web address.

I looked them up as soon as we got home that night, and an hour later, I knew that was exactly the kind of community that we wanted for Cristina. Over the following days, I emailed and then spoke with families involved in the Kansas community, and they invited interested people from the Austin area to go visit them.

I began speaking with everyone I had ever encountered – through Special Olympics or school – to gauge the level of interest in our community. I started creating an email list of those who showed interest, and I was encouraged by the enthusiastic response.

I set a date in August to visit Kansas and invited anyone who was interested to go. Six people accepted the invitation.

We witnessed a vibrant community, which is a wonderful hybrid of independence, but with the appropriate level of support provided by families who remain an integral part of their children’s lives. They have 18 participants who live alone in 1-bedroom units, sprinkled around a complex of probably 200 or so units.

After our visit to Kansas, we knew we wanted to see how we could start a similar community in Austin. Not everyone who went to Kansas continued to be involved, but over time we formed a steering committee, chose a name, drafted bylaws, incorporated, and obtained a 501c(3) nonprofit designation. Adults Independent and Motivated (AIM) was born.

After scouring Central Texas for a suitable location, we found one that met our criteria. Our apartment complex is in an Austin suburb, and our participants can easily walk to a wide variety of stores, restaurants, and entertainment. Our first participants moved into their apartment in January 2015. Rent in Austin is quite high, so rather than living alone like the people in Kansas do, our participants will share apartments.

We expect our number of participants to increase steadily, and in keeping with the model, we require potential participants to date AIM for an extended period of time to see if they are indeed compatible. We want to have enough participants so that it is easy for them to find spontaneous opportunities to socialize with other participants – walking over to the library or meeting in the apartment clubhouse for a game of pool – but not so big that the community is too large to manage.

Although we are still a young organization, for at least 1 of our participants, our launch could not happen fast enough. On the day I told Cristina that an apartment unit was available and she now had a move-in date (She and her roommate had been on the apartment’s waiting list.), Cristina said, “I am the happiest person in the world!”

Employment is More Than Work

When considering employment, money is a major motivation for most people. However, for those with intellectual and developmental disabilities, the motivation to work is often very different.

The Future is Coming!

My daughter is 27 years old. She has Down Syndrome and intellectual and developmental disabilities. I obtained guardianship for her just last year. Here’s how and why our family decided to shift from the least restrictive legal guardian option to the most restrictive option.