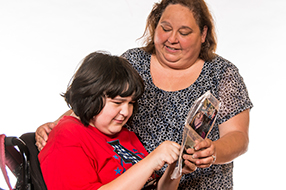 Parents often experience occasional problem behavior from their children – that’s just a part of growing up. Sometimes, however, problem behavior can become more frequent or significant in its impact, such as when it starts to get in the way of a child’s opportunities to learn or take part in community life, or when it affects the child’s or family’s quality of life. When this happens, families might benefit from getting help from someone with knowledge and skills around behavior change –positive behavior support in particular.

Positive behavior support (PBS), also referred to as positive behavioral interventions and supports (PBIS), is an approach to preventing and changing problem behavior that is based on behavioral science and a person-centered approach.

All of this is done with two approaches: supporting positive behavior and making the problem behavior unnecessary.

Understanding the Purpose of Behavior

The first step in the PBS approach is to understand why a child is engaging in (doing) a problem behavior. This is critically important because different people may use similar behaviors for entirely different reasons, and the same person may use the same behavior for different reasons under different circumstances. While the assessment (called a functional behavior assessment) to figure this out is usually done by someone with PBS skills and knowledge, parents can often get a pretty good idea about the purpose of a behavior by writing down what happened right before the behavior and what happened right after.

Using this information, parents can try to figure out the broad purpose (or function) of the behavior:

Understanding the first part – the conditions that make the problem behavior more likely – will lead to ideas about how to change the setting to prevent challenging behavior. Understanding the second part—the purpose or function of the behavior—will lead to ideas on what strategies to teach the child (and parent) to make the problem behavior unnecessary.

Take the case of Sarah, a lovely 7-year-old child with Down syndrome. Sarah only has about 20 words in her vocabulary at this age, and often seems frustrated when people don’t understand what she wants. While her parents sometimes saw problem behavior from Sarah when she was younger, it was a lot like what they had experienced with her siblings who did not have disabilities. More recently, however, Sarah started hitting and scratching her mother, father, and teacher at school. There were also incidents where Sarah started crying and hitting herself in the head.

Finding the Purpose of Sarah’s Behavior

With behavioral support from someone who knows about PBS, Sarah’s parents started writing down the conditions or events that happened right before and right after the problem behaviors. After a week or 2, they could see some fairly clear patterns.

Armed with this information, Sarah’s parents were ready to develop strategies to better support their daughter. They wrote down the things they thought were important to Sarah, like having special time with them in the early evening after school and playing with friends, and they came up with strategies for her to do those things more often. A particular problem time was when she wanted attention but the only parent at home was cooking dinner, so her parents decided to try to let her help during meal preparation. Sarah seemed to love this because, not only did it give her something important to do, but she also could do it while spending time with a parent.

Sarah’s parents then thought about the other facts they had gathered about Sarah’s problem behavior and came up with some more strategies to help her. Because the scratching and hitting were more likely to happen during tasks that Sarah did not like, they used three strategies:

Because she tended to cry and hit herself in the head during times when she was not getting a lot of attention, Sarah’s parents started looking for opportunities to reinforce more desirable behavior with attention and praise. Helping in the kitchen almost got rid of this problem behavior entirely during mealtime preparation, but Sarah’s parents knew that there were other times when they would be busy with something and they wouldn’t be able to include her. In order to prevent the problem behavior during these times, they used these strategies:

With these strategies in place, Sarah’s problem behavior happened much less often, and everyone in the family seemed happier. And, with the behavioral problem-solving knowledge and skill the parents gained from this experience, they are better prepared for any future issues Sarah might face.

For more parent-friendly information on PBS, visit the “For Families” link at the website for The Center on the Social and Emotional Foundations for Early Learning, or read the book Parenting with Positive Behavior Support: A Practical Guide to Resolving Your Child’s Difficult Behavior by Meme Hieneman, Karen Childs, and Jane Sergay.