What It’s Like to be Siblings of Children with Disabilities 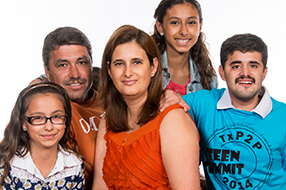 My name is Randall. I'm 30. My older brother, Will, was born with severe mental disabilities. He's 32 and doesn't talk, read, or write, though he understands much of what is said to him. Today my brother and I are good friends and enjoy each other’s company, but we didn't get along nearly so well when we were kids. I always loved my brother, but I didn't always like him.

I sometimes felt cheated out of a proper older brother. I looked with envy at other boys who had siblings they could talk to, play Nintendo with, and jump on trampolines with. Other kids didn't always get along with their siblings; I knew it was normal for siblings to fight and yell at each other, but at least the other kids’ siblings could yell words.

Getting my brother ready for school in the mornings was often an epic battle that required both of my parents’ full attention. Some mornings he was really not down with dressing and brushing. So, on school mornings, I was always completely responsible for getting myself up, making my own breakfast, and packing my own lunch. I was often secretly envious of other kids in school when they opened their lunches not knowing exactly what they were going to find. I wished that, just once, I too could be surprised by the contents of my lunch because someone else had packed it for me.

To my parents’ credit, they really did try their darnedest to give both their sons equal attention, but that just wasn't always possible. It was a simple fact that my brother required much more physical care than I did, so they needed me to look after myself a lot.

Having to be responsible for myself so much of the time from such a young age has certainly had advantages. I learned to cook scrambled eggs, pancakes, sandwiches, and other basic foods very proficiently. When I was in Boy Scouts and was put in charge of making breakfast on a camp-out, the other boys watched in awe as I cracked a dozen eggs one-handed without breaking a single yolk and without getting a single flake of shell in the bowl. Then I was puzzled by their amazement. (“You mean you can't do that?”) I had the same sort of experience when I first lived in a college dorm and encountered people who had absolutely no idea how to do their own laundry.

Why am I able to get along with my brother so much better now than when we were kids? Several things changed: First, I grew up. When I was a kid I saw the situation through selfish eyes. I thought of myself as a victim who had been wronged by getting a faulty brother. Some time in my teens I experienced a major shift in perspective that allowed me to be much more patient with my brother and to appreciate him more.

My brother has also changed a lot since we were kids. He used to have behavior problems and throw temper tantrums, but he suddenly got much better when we changed his anti-seizure drugs. It turned out that the meds he was on for most of his childhood and adolescence made him feel crappy, and we didn't realize this until his doctor switched him to a new med with less severe side effects. After the med switch, he was a much more cheerful and friendly person.

It probably also helped when my brother and I both moved out of our parents' house and didn't have to be around each other every day.

These days my brother and I are good friends who enjoy each other’s company. I take him out to eat and to the movies, or we just lounge on our parents’ couch and watch music videos. I like my brother, because he's straightforward and always lets everyone know exactly how he’s feeling. He has a good sense of humor and a contagious laugh, and he also reminds me to take things slow and enjoy simple things in life.

I don't feel in a position to give anyone else advice, especially since everyone’s family is so very different. All I can say is that I often had a hard time getting along with my brother, but growing up with him also helped me learn some very useful skills, both practical and emotional. Even though I often got mad and frustrated with him, I always loved my brother.